The marvelous pursuit is an attempt to find paths out of alienation, by refusing to conceive of human action as divisible into the physical and the mental.

The marvelous pursuit is born from the desire to create playful complexity in a desert of simplistic convenience. A hobby is a form of consumption, the marvelous pursuit on the other hand, is a rejection of commodified convenience, it can't be bought because it has no price. A marvelous pursuit refuses socially ascribed use. People learn such socially useless things as the names of fern and the grammar of dead languages because they are bored with the mind-dumbing options dished out to them on TV.

People need not only to obtain things, they need above all the freedom to make things among which they can live, to give shape to them according to their own tastes, and to put them to use in caring for and about others.

Marvelous pursuits are a means to resist alienation from one's environment because they are a temporary means to make that environment one's own, by ascribing one's own, often bizarre, value for things and spaces.

These pursuits often create complexity but a complexity which is opposed to that of the technician. The master of a marvelous pursuit can never be an engineer because the marvelous is by nature useless to society, and therefore to capital. 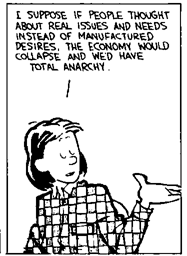 Hobbies are forms of alienated leisure, compartmentalized parts of one's life, past-times whose purpose is to fill our time with countable accomplishments and enjoyments. The value in marvelous pursuits lies in their self-creation which evades both use-value and exchange value.