Little games to play with cards, dominoes and dice.

Domine is a 2-players domino game.

Each player draws a hand of seven dominoes and keeps them hidden from their opponent. The two numbers on either side of a domino are the Attack and Defense points, facing the opponent and the player respectively.

Each turn consists choosing which is the attack side and which is the defense side. Players alternate turns until all dominoes have been played. The player with the most living dominoes wins. 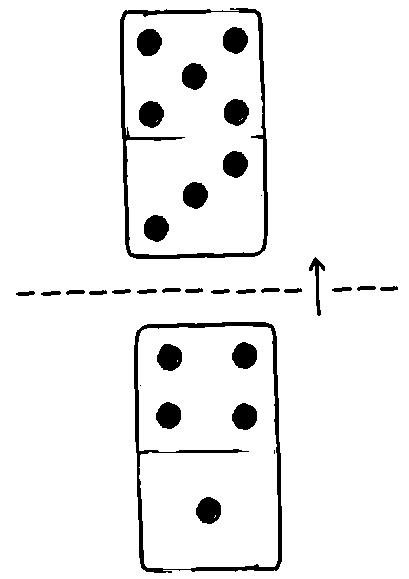 The player plays 4a1d, attacking by 4d. The opponent defends with 3a5d. The attack of 4d is blocked by 5d, and counters with a riposte of 3a, winning over 4a1d. The opponent wins this round, the player's domino is flipped.

Hako is a 2-players dice game.

Hako is played with eight six-sided dice, each player has 4 dice, each of the six faces is unique and painted as four triangles with two different colors.

Players each pick a color, and begin with four dice. Each turn, a player rolls a die and try to surround a die in play, with four triangles of its own color.

After playing their last die, players reroll a die in play which was not played last, and which does not create a floating die. A floating die is has no immediate non-diagonal neighbor. The game ends when a player surrounds a die with four triangles of their color.

A special case can happen when a dice will create both a victory and a defeat, this state is called the Ho state, it is considered a draw.

The name Hako is the hexadecimal number 18, in Bibi Binary, which is the total number of faces on a Hako die. A paper Hako die can be made from a sonobe 6. The game was originally played by the Iridi people in Wiktopher. The Iridi die is a painted or engraved stone, textured dice are used when played in low-light settings or with blind players.

Donsol is a dungeon-crawler card game.

Donsol, designed by John Eternal, is a card game about exploring a dungeon of 54 playing cards. A rom of the game is available for both Famicom and Varvara, to learn more about the downloadable version, see this.

A standard deck of 54 cards, jokers included, is a dungeon. Shuffle the deck and draw 4 cards, display them before you, this is a room. A room ends when all the cards are folded.

Drinking multiple potions in a row will make you sick and result in no extra healing, only the first potion's value will be gained in HP. Potions are equal to their value and face cards (J,Q,K,A) each are equal to 11.

A shield absorbs the damage difference between the shield value and that of the attacked monster's value.

Shields can only defend against monsters in descending value and if you use a shield on a monster with higher or equal value to the previous, it will break. Broken shields leave you unarmored, and taking full damage. Folding shield card will always replace a previously equipped shield. Shields are equal to their value and face cards (J,Q,K,A) each are equal to 11.

You may escape a room. When escaping, the remaining cards are put back at the end of the deck. A player is allowed to escape a room:

The game was released in collaboration with John Eternal, for mobile in 2016, and re-released for Desktop in 2017 as Hundred Rabbits. While the game was designed on a train, without internet connection during Train Jam 2015, it seemed like Donsol's gameplay accidentally ended up quite similar to Zach Gage and Kurt Bieg's Scoundrel, designed in 2011.